Neem's action maximises the natural immune system and can selectively wipe out invading microbes without adversely affecting other cells. Pharmaceutical products can contain toxic chemicals powerful enough to eliminate all microbes, but often also harm healthy body tissue and may cause undesirable side effects.

Neem has no known side effects.

Melt a pot of Ekoneem oil in tepid water until it becomes liquid. Add 1x5ml teaspoon of Ekoneem oil to a 500ml (1/2 litre) of water with a squirt of baby shampoo. Shake or stir vigourously. Apply with a clean plant spray bottle.

NB: Ekoneem oil deteriorates in water therefore only make up the amount needed for each day.

WHAT MY CUSTOMERS SAY

Hi Hilary, I rang regarding the ekoneem treatment for my westie (Jez) who was suffering quite badly at the time with his skin condition and dispite all the steroids and antibiotics from the vet, it just wasn't clearing up, but after using your ekoneem oil and soap with 3 baths per week his skin has much improved. His fur has grown back and he's doing great. I bathed him 3 times a week and applied the oil once a day for 3 weeks, then just 3 baths a week using the ekoneem soap for a further 3 weeks. Hes now off all steroids and medications and now has 1 bath a week using the ekoneem soap, if any spots do come, 2 to 3 days of the ekoneem oil and hes back on track. Just wanted to say a massive thank you for your support and the product. Please find attached an image of his skin before and after. KB. 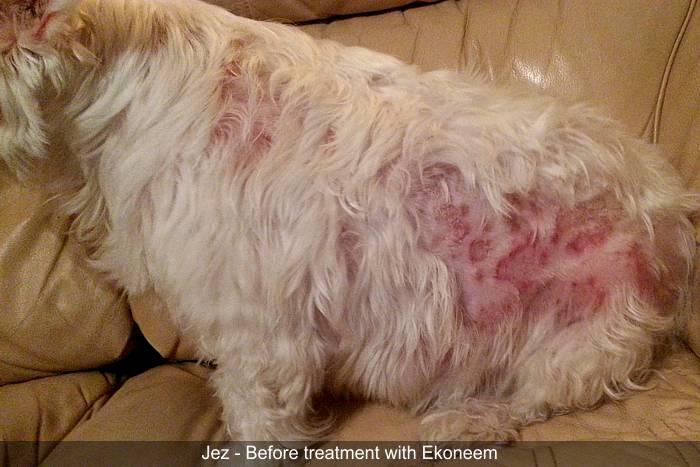 Jez - Before treatment with Ekoneem 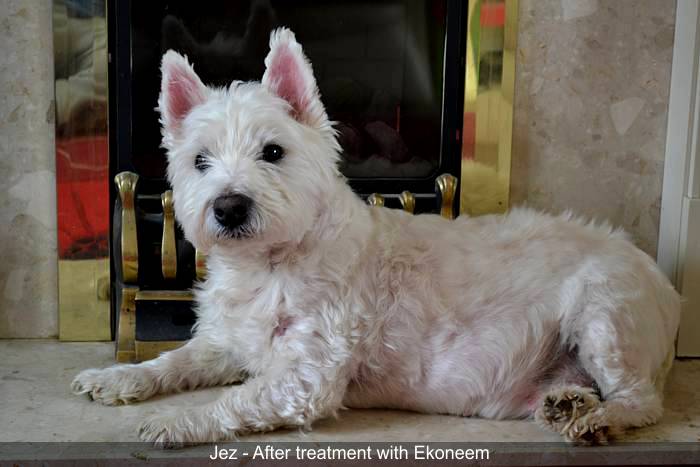 Jez - After treatment with Ekoneem

"I think Ekoneem Neem Oil is fantastic. I would recommend it to anyone with horses." - AR - Horse Owner, Meikleour

My dog is now free of fleas also my son's verrucca has vanished thanks to Ekoneem neem oil!.
JH Perthshire.

I am happy to say Ekoneem neem oil has had a very markeed effect on my dog after only three days. The scaly type scurf has disappeared and the scratching has stopped.
KF Manchester.

Our Jack Russell had an itchy rash on his tummy on which nothing had any effect. Ekoneem stopped the itching overnight, the rash has gone and now the hair is growing back.
AB Yorkshire.

"Dear Mrs Thomson,
I'm happy to say the oil "Ekoneem" has had a very marked effect after only 3 days use. The scaly type scurf has disappeared and the scratching has virtually stopped. I have already recommended it to other dog owners who's pets have long term skin irritations."

"You very kindly sent a pot of Ekoneem which arrived earlier in January. I am very pleased to report that the scabs have completely gone on my Beagle's side together with the red patches. The coat has very nearly grown back and I feel happy to start entering her again for shows." SK - Coachbarn Beagles.

"Dear Hilary,
I am writing to say many thanks for sending me your product "Ekoneem" it has worked really well with Belle our Cocker Spanial. Belle has an adverse reaction - to what we do not know - but regularly gets small spots which turn flaky and scabby and take ages to go. Since we have had Ekoneem neem oil, which we have applied to the affected areas, it soothed the irritation allowing her to heal naturally within a week." FAW - Dorset.

"Thank you for sending me neem oil so quickly. I started using it on the Friday and within a week Alfie had nearly stopped itching. By 10 days he had stopped altogether. It also stopped the mosquitoes from biting the two puppies who live outside and stopped the rash and wet patches from spreading caused by these bites." - SK - Casbrion Rottweilers.

I recently purchased Ekoneem to use on my bitches scaly skin. I am pleased to say it has completely cleared up - the dry skin just seemed to lift up and come off. I have recommended it to several friends since.
SF Teeside.

I used it straight away on my Chow who has itchy paws. Has had surgery on one this Summer but still bites, nothing was working. Low and behold Ekoneem soothed it within hours. Couldn't believe it.
BK

I originally bought Ekoneem to help my young Gordon's cracked pads and it worked well. I have since used it on a nasty looking rash which erupted on one of my old Gordons - it soothed it immediately allowing it to heal naturally in 3 days.
TT Chelmsford.

My dog had nasty scratched areas(it was so bad I was ashamed to take the poor girl out in public) with big bald patches on her head and down her back. I tried Ekoneem and was amazed, she stopped itching, her skin started to heal and now the hair is growning back beautifully.
SF Birmingham.

"Dear Mrs Thomson,
There was no immediate improvement noticed on my bitch's scratched coat, but after about four days it became obvious, then rapid improvement took place enabling her to be shown at LKA less than three weeks later.
I used about half the pot rubbing it in twice a day, morning and evening. It was quite acceptable to the bitch who made no attempt to scratch or lick it off.
I have therefore no hesitation in recommending EKONEEM as I have mention in my "Dog World" Beagle Breed Notes. Thank you for your help." - DW

My 7 year old Irish Water Spaniel had a persistent bald patch about the size of a two pence piece under one eye, which nothing would clear. Ekoneem neem oil cleared it within 14 days. My sister's dog had a very sore wet patch on his back for which various remedies had no appreciable effect. Again Ekoneem came to the rescue - it soothed the irritation allowing the her to heal naturally and the hair is re-growing all within 14 days.
PB Gloucester.

"Dear Mrs Thomson,
Re: Purdey - Pointer bitch - 4½ years old.
Thank you for supplying Ekoneem. Our pointer has a very bad itchy patch on her face which she scratched raw. Various other remedies cleared the area temporarily, but within a few days Purdey started to scratch the area and it broke out again.
Then we received your Ekoneem, we have used this twice daily for 2 weeks and then once a day at night. We cannot believe the result, Purdey's hair is growing back and she has stopped scratching. We are so grateful we have told our "doggie" friends and have given them copies of your leaflets, enclosed sae would you kindly send some of your leaflets to pass around. Many thanks." - MM

I have just had a grateful call from Jacqueling Brandish of the Corramundi Bull Terriers in North Wales. Her four-year-old mahogany brindle bitch began having sore feet about 18 months ago, since when she has had increasingly sore feet. Jacqie says she was at her wit's end to know how to ease her beloved bitch's discomfort.
She said she read about how well Ekoneem had worked in my column and rang for some, which arrived by the next post. Wihin just 12 hours of the first application, Pepper had stopped biting herself and the skin on her feet had turned from bright red to a normal healthy colour. Jacqueline is so grateful to have her own happy, playful bitch back once more.
'Dog World' - JL 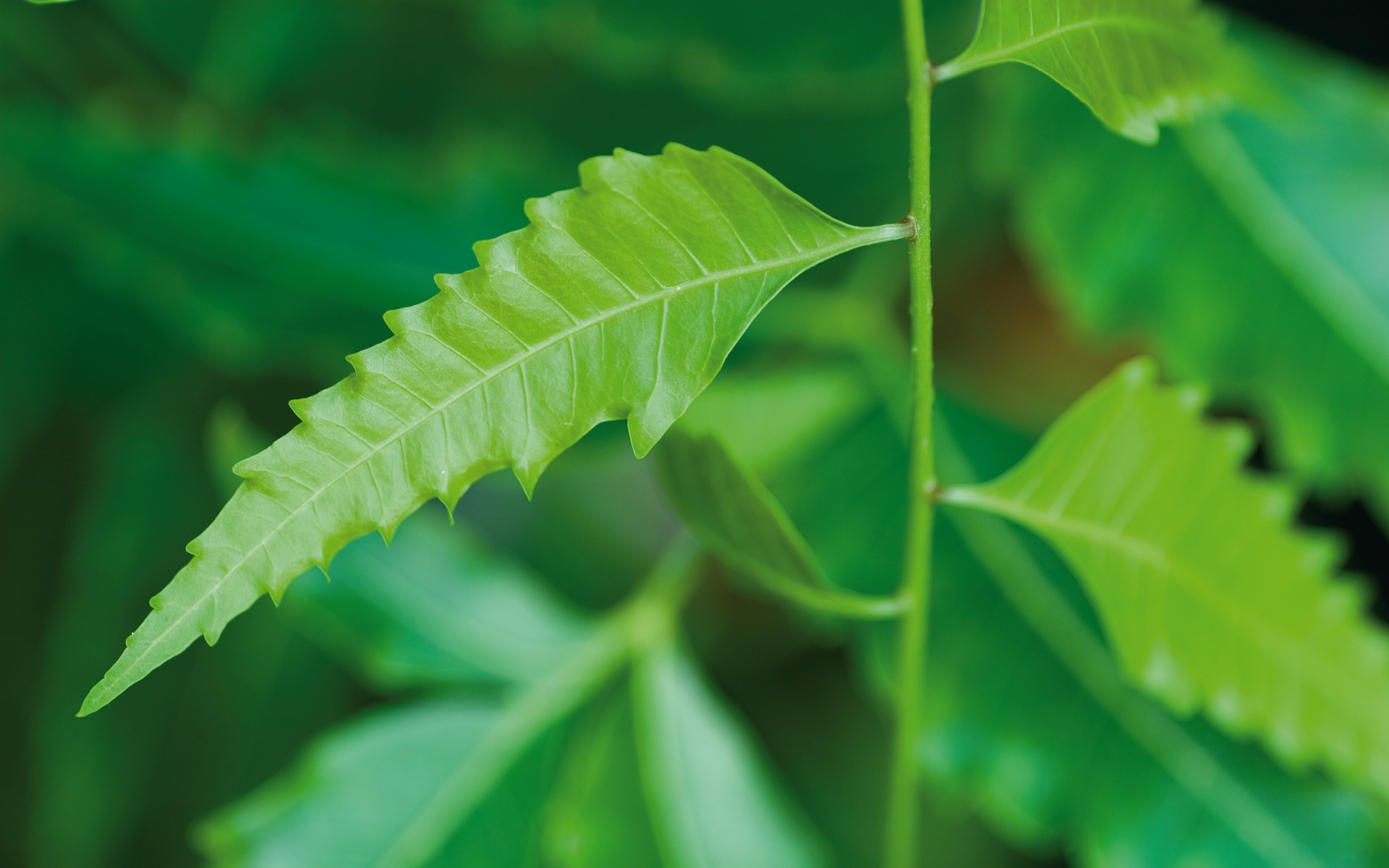